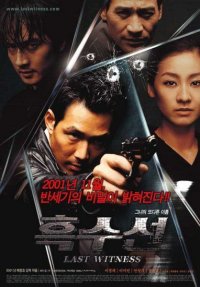 Synopsis
The corpse of an old man is found floating down the Han River. It is the corpse of a man named Yang Dal-soo. Detective Oh, while investigating the murder case, comes across several tell-tale clues: metal framed glasses specially manufactured in Japan, the letters 'Daeryang' printed on a torn-up business card, as well as two photographs found in Yang Dal-soo's home. Oh goes to Ok-Cheon Elementary School where Yang's pictures were taken. While investigating, he finds a diary written long ago by Sohn Ji-hye and discovers the unbelievable secret about the Geoje P.O.W. camp. Yang, whose job was to arrest prisoners who attempted to escape during the Korean War, fell in love with Sohn and helped her escape, disappearing along with her. Hwang Seok who had been in love with Sohn, was put in prison and served a 50-year sentence for refusing to convert from communism. Coincidentally, his release was just one day before Yang was murdered. Then Kim Jeong-yeop, another security guard at the camp who worked in the same capacity as Yang, was also found murdered. The owner of the metal-framed glasses is revealed to be Maeda Shintaro, a Japanese businessman. Detective Oh finds out that Maeda has another identity, Han Dong-joo who was reported shot after trying to escape from the camp. As Han is found to have visited Korea at the same time as Yang's death, he becomes the prime suspect in the case.

View all 59 pictures for "The Last Witness"