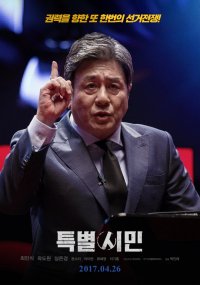 Also known as "Special Citizen"
Crank in : 2016/04/28
Synopsis
Byeon (Choi Min-sik), the Mayor of Seoul who is in his second term, announces his plans to run for mayor again while hinting his political party of his ultimate goal to run for the presidency. A heavily-resourced campaign team is formed, headed by the campaign manager Shim (Kwak Do-won) who is known as a crafty politician, while Park (Shim Eun-kyung), a young prodigy from advertising, is recruited for fresh perspectives in the re-election campaign. But one obstacle after another is thrown their way while his opposing candidate is in the lead. And soon, the dirty realities of politics soil everyones hands.

The Mayor | VOD, Streaming and downloads

View all 186 pictures for "The Mayor"

The Mayor | Videos | Suggest a video

The Mayor | Links | Suggest a link