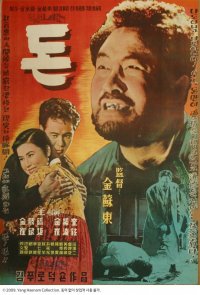 Synopsis
Bong-soo (Kim Seung-ho-I) is a nave farmer. Although he works as hard as possible, he never gets to be better off. He even postpones his daughter Soon-i's marriage. Yeong-ho (Kim Jin-kyu), a son who comes home from military service, is in love with Ok-kyeong (Choi Eun-hee). She has grown up at Bong-soo's, and works at the bar of Eok-jo's wife (Hwang Jung-soon). Poverty-stricken, Bong-soo is cajoled by Eok-jo, an usurer, into selling cattle and starts a used goods business to make money. But he is deprived of his money by a swindler (No Gyeong-hui) and his group in Seoul. One night Bong-soo picks up some money Eok-jo drops while he is trying to rape Ok-kyeong. While Bong-soo fights with Eok-jo, he kills him by accident. Ok-kyeong picks up the money, and gives some to Yeong-ho. With that money Ok-kyeong and Yeong-ho are about to be off to Seoul, but are caught by the police who are investigating Eok-jo's murder case. Convinced that they are murderers, the police put them in custody and send them to the police station by train. Bong-soo follows the departing train, crying out that he is the murderer and that it should be him who should be arrested.

View all 15 pictures for "The Money"

The Money | Links | Suggest a link