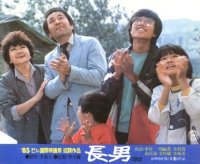 Synopsis
The oldest son is a typical modernized man. When his hometown is filled with water for a new dam, his elderly parents leave and come to Seoul. However, his parents are uncomfortable with the sudden move to a tenement apartment. They move in with their youngest who has built a temporary house on a vacant lot which the oldest son has prepared in order to build his parents a house. Around this time, the oldest son goes to Jeju Island on business. He leaves the responsibility to his brother to watch over the construction of their parents' house. His elderly parents go to the construction site every day and watch with great satisfaction. Soon, a day when their new house is almost finished, the mother suddenly passes away. The oldest son belatedly hears the sad tidings. As he reaches Seoul, he stands before his mother's body and sobs sadly.

View all 7 pictures for "The Oldest Son"