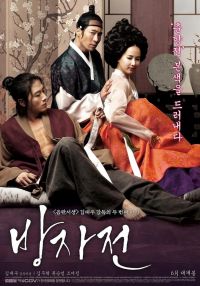 Formerly known as "Bang-ja Chronicles"
Bang-ja bumps into the noble Mong-lyong. When Mong-lyong decides to take him under his wing, Bang-ja gets to share a room with the wise, MA. While sharing the room, MA teaches Bang-ja of all the arts of seduction. When strolling the park one day, Mong-lyong meets Chun-hyang, the daughter of the owner of the park, and he instantly falls in love and encourages Bang-ja to arrange a meeting with her. But Bang-jas feeling for her was also the same and he seeks advice from Ma. Ma tells him of Chun-hyangs real intention to win over Mong-lyong for his social status. Without knowing, Mong-lyong urges for a second meeting with Chun-hyang. Bang-jas anger towards Mong-lyong for using his nobility to attract her heart triggers his plan to use Mas art of seduction. Successfully he wins her heart and body, but under the condition that he will help her to get married to Mong-lyong. Everything seems to go as planned but when Mong-lyong finds out their relationship, whole thing is about to go wrong.
__________
"Bang-ja Chronicles" (BANGJAJEON) is a motion picture twist to Chunhyangjeon, a classic Korean romance novel. In this new film, Kim changes its plot - in the original novel, it's a love story of Mongryong and Chunhyang, but in the film, Bangja, Mongryong's servant, joins in to make it a love triangle.

The original novel has been adapted into movies several times, most notably as SEONG CHUNHYANG in 1961 by Shin Sang-ok. Starring Choi Eun-hee and Kim Jin-gyu as Chunhyang and Mongryong, respectively, it was one of the first full color-cinemascope Korean films. Veteran director Im Kwon-taek also made his own adaptation CHUNHYANG in 2000, starring Jo Seung-woo and Lee Hyo-jeong.

View all 82 pictures for "The Servant"

The Servant | Videos | Suggest a video

The Servant | Links | Suggest a link