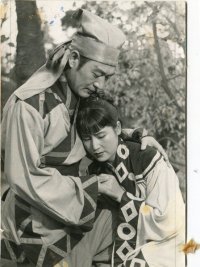 Synopsis
On the eighth of April of King Gyeong-deok's 10th year of reign of the Unified Silla Period, Guseulagi (Choi Eun-hee), a daughter of Yu Jong, joins the king's parade to Bulguksa Temple, where she meets a stonemason named Asadal (Gwak Geon) from Buyeo. Having a crush on him, she visits Sakyamuni Pagoda, a masonic site; only to find that Asadal had broken down from exhaustion. While she takes care of him, her love for him grows. But Asadal misses his wife who is waiting for him in Buyeo. Meanwhile, Geum Seong who has a crush on Guseulagi, asks his father, Geum Ji, to propose on behalf of him. But Yu Jong is so dissatisfied with Geum Ji because he is a treacherous subject, that he turns down the proposal, instead hurrying up his daughter's marriage with Gyeongsin, a faithful subject. Asanyeo who has been waiting for her husband Asadal in Buyeo, goes to Bulguksa Temple after her father-in-law had died. A janitor refuses to allow her in, because he fears she might interrupt Asadal's work. Instead, he tells her to wait for her husband at a pond where the shadow of the pagoda is reflected on a clear day, until the pagoda is completed. Out of despair, thinking that Asadal has changed his mind, Asanyeo commits suicide by throwing herself at the shadow on the pond. Later, on hearing the news, Asadal loses his mind and throws himself into the pond, as well.