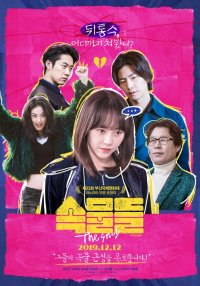 Synopsis
Seon Woo-jeong is an artist who plagiarizes other people's works and lives on them with a plausible expression 'borrowing'. One day, she is offered a special exhibition by a company, and not to lose the chance, she sleeps with the head curator of the art museum. After that, she starts to see the man secretly behind her boyfriend, and one day, So-yeong, who has been friend with for 20 years returns from abroad and stay at Woo-jeong's boyfriend's house. As Woo-jeong, the boyfriend, the curator, and So-yeong are entangled, Woo-jeong's work and love begin to shake at the same time. This movie shows outward appearance and other people's inner feelings. Like the swan, which paddle hard not to sink under a calm surface, the characters in the movie have second thoughts inside, pretending to be elegant and sophisticated outwardly. Woo-jeong might be a rather straightforward person in that respect. She is ready to do anything for her desires. Can you blame her? At least, none of the characters in the movie seem to be capable of doing it. (Nam Dong-chul)

View all 36 pictures for "The Snob"

The Snob | Videos | Suggest a video

The Snob | Links | Suggest a link