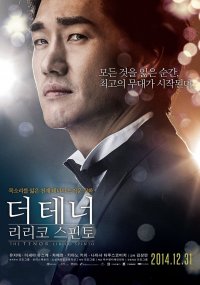 "The Tenor Lirico Spinto" is a co-production between South Korea and Japan.
Synopsis
Movie based on Bae Jae-cheol, a Korean opera singer acknowledged in Europe. Bae Jae-cheol is an opera tenor recognized even in Europe. After hearing the famous Baes voice himself, Japanese music producer Sawada Kohji wants to have him on stage in Japan. At first, Bae, who was already doing great, did not show much interest in Kohjis proposal, but later on moves the audiences hearts by singing passionately on the Japanese stage. One day, Bae hears devastating news. He is diagnosed with cancer. He has to go through an operation affecting the vocal cords in order to save his life, which will prevent him from singing after the surgery. The tenor gets the surgery to live but is left miserable as he can no longer sing. Sawada Kohji suggests an operation that will recover Baes voice.

View all 68 pictures for "The Tenor Lirico Spinto"