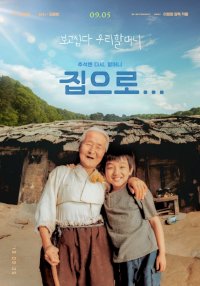 Re-release date: 2019/09/05
Synopsis
This is the story of a 7-year-old boy, Sang-woo, born and raised in the big city, and his mute grandmother, who has spent her whole life in a small rural village. Forced to stay with his grandmother, Sang-woo learns about the ups and downs of life. Being a city boy, used to the benefits and luxuries of the modern society, he realizes that there are no batteries for his toys, only rocks to play with. Like the city brat that he is, he begins to torment is grandmother - whining and demanding things she can't provide. But she never reprimands him for his behavior. One day, he demands fried chicken. Using a primitive form of body sign language, he finally gets her to understand his craving. But what he gets in the end is the traditional boiled chicken. How will their living arrangement turn out for these two very different roommates...

View all 54 pictures for "The Way Home"