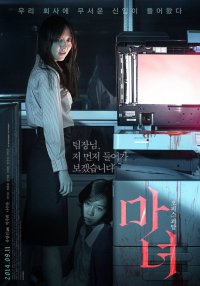 Synopsis
Saeyoung is a new employee who eventually stands against Leesun, her stubborn team leader. Leesun is upset by Saeyoungs behavior, but she soon learns about ominous stories about Saeyoung. As the stories about Saeyoung are revealed one after another, she becomes a source of fear to Leesun. Saeyoungs stalking-like bullying continues, and Leesun tries to run away from her.

In this film, Saeyoung is the character of a devil incarnate. As the plot unravels, her unlucky past also reveals itself, which nevertheless does not make her less wicked because she is not a character we can easily develops sympathy with. Director Yoo Youngseon does not pay much attention to explain her wicked behavior based on causes and effects. If the plot explains why she does certain evil acts, that is like the minimum safety valve.

Instead, this film focuses on elaborating her evil acts. Saeyoung is angry about that fact that no one has ever loved her and finally succeeds in destroying people around her just because they are loved by somebody. Going beyond the boundary of thriller films, the director seems to try to transmit the strange energy of Saeyoung to the audience.

Considering the Korean society that is becoming more and more indifferent to othersagony, this film is all the more realistic with the story of a victim turning into a terrifying assailant. (Kim Youngjin)

View all 74 pictures for "The Wicked"

The Wicked | Videos | Suggest a video

The Wicked | Links | Suggest a link