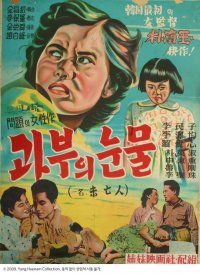 Synopsis
Sin-ja (Lee Min-ja) living in exile with her daughter Joo (Lee Seong-ju) ekes out a living thanks to a company president Lee Sung-jin (Sin Dong-hun), a friend of her husband who passed away during the Korean War. But Lee starts to fall in love with her as he helps her. Then Lee's wife (Park Yeong-suk) notices it and feels jealous, becoming ever more hysterical. She wants to fill the emptiness with the love for a young man she happens to know. His name is Taek (Tackyun). One day Joo, the daughter of Sin-ja, is about to drown in the sea, and Taek saves her. The love affair between Taek and Lee's wife then changes. Lee tempts Sin-ja to love him, but she falls in love with Taek, who had saved her daughter's life. She even sends her daughter to somebody else's house to live with Taek. Taek's lover, Jin (Na Ae-sim), whom he thought had died during the war, appears out of the blue. Taek leaves Sin-ja, and she is at a loss. Taek settles in with Jin, and tells Sin-ja he wants to break up with her. Sin-ja raises a knife because she is just so shocked by this.

View all 7 pictures for "The Widow"

The Widow | Links | Suggest a link