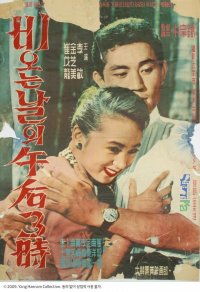 Synopsis
This film is about a love triangle between Korean-American Henry Jang (Lee Min), Soo-mi (Kim Ji-mee), and her fiance, In-gyoo. Soo-mi, an orphan, is granted a new family that of her fiance, In-gyoo. When In-gyoo joins the Army and is reported dead in battle, it drives Soo-mi into despair. She, however, soon meets a new love, Henry, who is serving as a chaplain in the American army stationed in Korea. But on their wedding day, In-gyoo suddenly reappears and Soo-mi vanishes without giving any explanation to Henry. When In-gyoo's sister, who has a crush on Henry, invites him to her home, Soo-mi runs into Henry once again. Soo-mi cannot decide between the two men, and complicating matters, she is dying of heart disease.

View all 10 pictures for "Three O'clock P.M. in a Rainy Day"