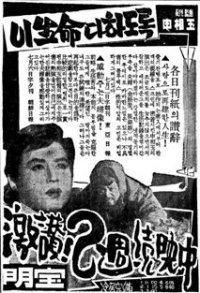 Synopsis
Captain Kim (Kim Jin-kyu), who participated in the Korean War, is paralyzed from the waist down. His wife, Hye-kyeong (Choi Eun-hee), takes care of him well. But when the family is evacuating to Daegu, their second daughter dies along the way. Hye-kyeong places the eldest daughter, Seon-kyeong (Jeon Young-sun), and her husband on a wagon and leaves to seek refuge. In Daegu, Captain Kim is hospitalized while Hye-kyeong earns a living by being a street peddler. One day, she meets Mr. Jo (Namkoong Won) who sells products near her stall. Mr. Jo, who was orphaned during the war, asks Hye-kyeong to be a surrogate sister to him, and the two quickly become close. Mr. Jo gets a house and suggests that Hye-kyeong live with him. Hye-kyeong, who has come to love Mr. Jo, is conflicted between him and her husband. One day when her husband comes for a visit, he witnesses Mr. Jo and his wife together and becomes furious, returning to the hospital. When Hye-kyeong visits him in the hospital, he begs her not to leave him, and tells her he cannot live without her. Hye-kyeong puts an end to her relationship with Mr. Jo and goes to Seoul to be with her family. Once there, Hye-kyeong and her husband establish a home for war widows and their children who have nowhere else to go. Their new hopes are dashed when Seon-kyeong dies in a traffic accident.

To the Last Day
Stream and watch full movie

To the Last Day | HanCinema Reviews

To the Last Day | News

To the Last Day | Pictures

View all 12 pictures for "To the Last Day"

To the Last Day | Links | Suggest a link

To the Last Day | Reviews

To the Last Day | Facts

To the Last Day | Community