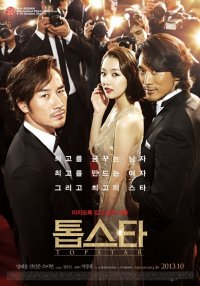 Synopsis
Actor Park Joong-hoon's director debut movie. A manager whose dream is an actor becomes a top star but then falls right back down again and the leading cast is Eom Tae-woong.

Tae-sik is only just a manager of the top star Won-joon, but he dreams of becoming famous like Won-joon in the future. An unexpected opportunity falls on Tae-siks lap one day when Won-joon is involved in a hit-and-run accident and Tae-sik takes the blame as the driver instead of Won-joon. In exchange, Won-joon promises Tae-sik his debut as an actor. Tae-sik's acting career kicks off when he gets out of jail, and his success and stardom start to threaten and intimidate Won-joon. Tae-sik finally becomes much more popular than Won-joon, but his pure passion turns into greed and he's on the road to corruption.