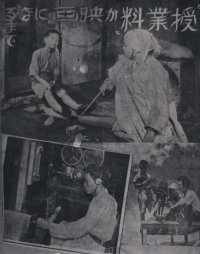 Synopsis
A film based on the memoir of a 4th grade student who received the grand prize in a writing contest sponsored by Gyeongseong Daily. A boy, whose parents sell brass spoons on the street while his grandmother is sick in bed, never has money for his tuition. Fortunately, his aunt offers to pay for his tuition and his classmates raising funds for him. To top it all off, his parents return a few days later to promise him that they will pay for his tuition the next time.

View all 23 pictures for "Tuition"