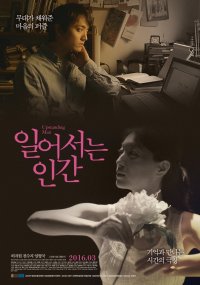 Synopsis
Jinho, an ex-actor and a would-be poet, writes his own play now. The theater company prepares for a new stage with Jinho's play. Sora, an actress and his ex-girlfriend, resists the play because she thinks it insinuates their past. Whatever past, whatever Sora and other members of the theater thought, Jinho believes that the stage will exceed to his humble everyday situation. Now Jinho, Sora and other members have no choice but to practice the play every day in their roles to put it on the stage. As the play begins, Jinho keeps doing as usual even though the play doesn't seem to be significant for him any more but at the end of the stage something strikes him. There is the other side of his play. The play is showing that clearly more and more under the stage lighting.

View all 6 pictures for "Upstanding Man"