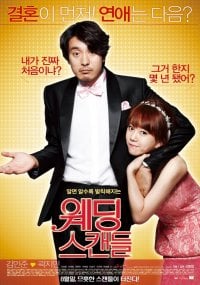 Synopsis
Who were you? Oops! I forgot the wedding!
One day, Jeong-eun (Kwak Ji-min) shows up in front of jobless youth Gi-seok (Kim Min-joon) whos only specification is his family register. She abruptly asks him about his the marriage with her twin sister So-eun (Kwak Ji-min). Gi-seok looks at her absurdly as they smile awkwardly at each other then he finally remembers the marriage he had with some girl a few years ago, lending her his specifications.

Marriage with the sister and dating with the other?
A cheeky marriage mission starts where they have to prove they are a married couple.
For her sister who is in false marriage captivity, Jeong-eun has to half-forcefully convince Gi-seok and pretend she was her sister and his wife but the evidence isnt enough. Just them, Jeong-eun recommends taking a video as if they were a loving couple. Gi-seok also idly agreed to it thinking about getting it over with since she was his sister-in-law. For perfect evidence they even make an intimate S video but unlike their thoughts the video goes through some trouble

View all 48 pictures for "Wedding Scandal"