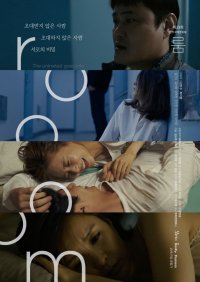 Synopsis
44 studios in Mangwon-dong, Seoul. An uninvited awakes people in the morning. The omnibus film "roooom" by Choi Ik-hwan preaches the irresistible power of love and desire. Like with Tarantino's "Four Rooms" (1995), it links the stories of four people in one space. However, the multiplex housing, a Korean housing type different from American hotel rooms, allows of a different type of story. It is a building manager to weave them together. He gets snaked, trying to get rid of a man illegally occupying his girlfriend's room, is visited by a mysterious woman, and witnesses the challenge and frustration of a young man dreaming of a rosy future. There are no common themes in the four episodes without the presence of the manager. "roooom" tells the verisimilar stories about ordinary people, but they have their skeletons in the closet. [JANG Byungwon]

View all 7 pictures for "roooom"