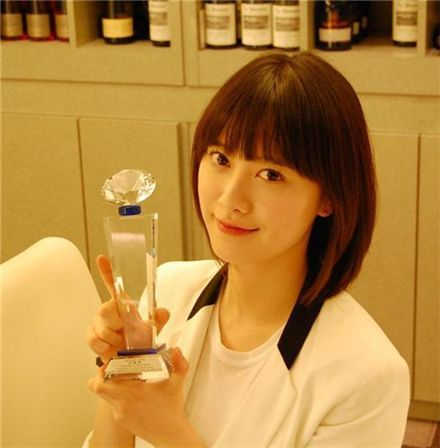 Korean actress Ku Hye-sun scored a win as a film director with her short feature "The Madonna" at the 12th Short Shorts Film Festival & Asia.

The actress, who received a special invitation to screen her short pic, was awarded the "Spotlight Award" at the event, she announced on her official Twitter page on Sunday.

She thanked the crew saying, "The staff had such a hard time [making the film]. Dinner on me. Everyone gather up".

"The Madonna", about a Catholic priest and nun performing euthanasia for people, was Ku's first short film which she directed in 2008.

Ku, who had originally planned to debut as a singer, started acting in several TV dramas and became a household name throughout Asia after starring in the hit KBS drama "Boys over Flowers" last year.

Known to many as also a talented artist, novelist and scriptwriter, she recently made her directorial debut with her first full-length feature film "Magic - 2010" which premiered at the Jeonju International Film Festival in April.

Other Korean films competing in the film fest include "Dream For a Masterpiece" (directed by Choi Moon-su), "A School Rep". (Park Sang-joon) and "Familyship" (Yoon Hye-ryeom).

Short Shorts Film Festival & Asia will be held in Tokyo from June 10 through 20.