Ku Hye-sun Talks About her Role in "Boys Over Flowers" 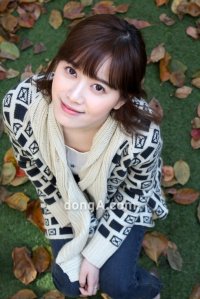 "Loving someone despite all obstacles may be one of the most difficult things in life. It may be harder than living in poverty", said Ku Hye-sun, who is playing the heroine whom two of the four protagonists are pursuing in the KBS2 hit drama "Boys over Flowers". And that is why most women viewers are jealous of her.

In an interview at a shooting site at Eulwangri Beach in Incheon on Sunday, Koo said, "I was skeptical about its success when I decided to take the role. I doubted it would appeal to Koreans because it is based on a Japanese comic book. Taking the role itself was a challenge".

Geum Jan-di, whom she plays, is an ordinary high school student who wants to be a swimmer. She happens to attend a school for rich children although her family is poor, with her parents running a small cleaners that they eventually lose to creditors. This gets her subjected to contempt and mistreatment, but she tries not to lose her dignity and faces her situation squarely.

Koo confessed that she herself couldn't understand the character completely. "There were moments that I couldn't sympathize with her. If I had been able to, I would not have had conflicts in my mind. I wondered why she tries to deal with all her difficulties alone and why she feels she has to take care of her family".

But the 25-year-old actress said that Jan-di has made her a more genuine and happier person. "By playing the role, I have become more positive. I was sorry to realize that I am losing innocence as I get older, and that made it more difficult for me to be Jan-di. So whenever I couldn't identify with her, I kind of forced myself to become more innocent".

She continued, "And I actually recalled my high school years, and realized that what I cherished most then was the people I liked. It seems I felt that if I could be with them, I could do anything".

The drama is enjoying great popularity thanks to Koo and the other stars who are giving their utmost effort despite some misfortunes they have suffered. Koo had a car accident on her way back to Seoul from a local shooting site and had to have the inside of her mouth stitched.

"I have to get a thorough examination when the shooting ends. I bumped my head hard as well, but had no time to get an examination due to the shooting schedule", she said. "The schedule is so tight that we all have trouble with our physical conditions. We are suffering lack of sleep so much that we can fall asleep at any moment. Now that all the shooting will be over in a week, we will hang in there until then".

In Incheon, she shot a scene where Jan-di, who has decided to part ways with her boyfriend Jun-pyo, played by Lee Min-ho, due to his mother's disapproval, goes on a trip with him for the last time.

"But I want it to come to a happy ending. I personally like stories with happy endings because they warm people's hearts. I hope my drama is also one of those kinds", said Koo.