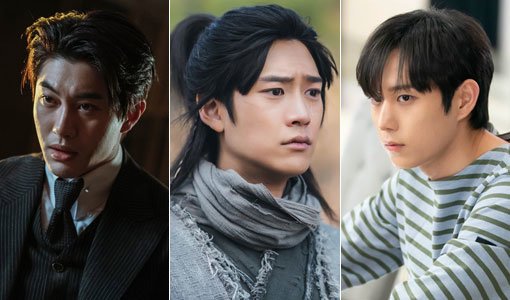 The divinities are coming.

Kwak Dong-yeon, Na In-woo and Kim Young-dae are hinting strong presence in various dramas. Expectations are also rising for broadcasters who have not been able to find young stars in their early and mid-20s for some time. Viewers are already looking at them as the next main characters in the small screens.

He appears as the chairman of the vicious company Babel Group on tvN's "Vincenzo" which has a ratings of 10%. Viewers' opinions are divided on whether he will remain loyal to Ok Taecyeon, who is his brother or whether he will be a traitor who hit him in the back of his head. The acting of madness and servitude is receiving favorable reviews, making it difficult to recognize who he is.

Kwak Dong-yeon debuted in 2012 at a relatively young age of 15, and has already been a nine-year actor. He has solid acting skills through various experiences such as weekend dramas, historical dramas, romance and musicals. Until now, the actor has steadily raised awareness for himself by participating in 24 works as main and supporting actor.

Na In-woo, crisis as an opportunity!

Instead of Ji Soo, who dropped out of a drama due to the controversy over school violence, Na In-woo was belatedly sent as the main character of KBS 2TV's "River Where the Moon Rises". By playing On-dal in Goguryeo's folklore, he overturned concerns and criticism at once. Thanks to the favorable reviews that 'he could have been the main character of the drama all along', the drama is the power to maintain a viewer rating of around 8%.

Since his debut in 2015 with the movie "Twenty", Na In-woo has appeared in more than 10 dramas until last year, but he has rarely become the main character. Recently, he has renewed his position as the main character of the small screen, ranking high in various drama topics.

SBS "The Penthouse 2", which saw ratings soar to 29.2% on the 27th. Kim Young-dae leads the story of Cheonga Arts High School students as fierce as the world of adults. As Eugene's daughter Kim Hyun-soo returns alive, she is sharpening the blade of revenge to his father, Uhm Ki-joon.

His height of 185cm and sharp appearance are the key to attracting viewers' attention. Through popular web dramas such as "Crushes - Special Edition" and "Office Watch: The Gossip Room", viewers in their 10s and 20s have noticed him. Thanks to his playing the role of a high school student in a row since MBC's "Extraordinary You" in 2019, he is drawing attention as the main character of youth romance.

"Kwak Dong-yeon, Na In-woo and Kim Young-dae Make Strong Presence"
by HanCinema is licensed under a Creative Commons Attribution-Share Alike 3.0 Unported License.
Based on a work from this source