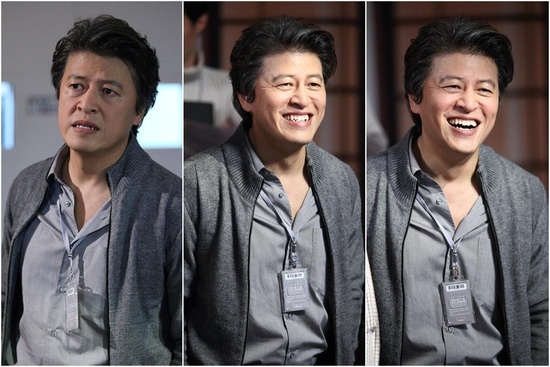 Actor Kwon Hae-hyo has become a talented CP in the SBS drama "The King of Dramas".

Kwon Hae-hyo takes on the role of Nam Woon-hyeong who is a star Chief Producer made up of value and success.

His righteous character and uprightness always makes Anthony Kim (Kim Myung-min) tense up around him.

In a still cut revealed on the 19th, Kwon Hae-hyo expressed the tension of a drama set with his whole body but smiled widely along with the 'cut' sign.

"King of Dramas" is about Anthony Kim, a character who claims money is the target for all work, Lee Go-eun (Jung Ryeo-won), a rookie script writer who claims drama is human love and Kang Hyeon-min (Choi Si-won), a stop star.

It will be aired after "Faith" on the 5th of November.

"Kwon Hae-hyo becomes a talented CP in "The King of Dramas""
by HanCinema is licensed under a Creative Commons Attribution-Share Alike 3.0 Unported License.
Based on a work from this source