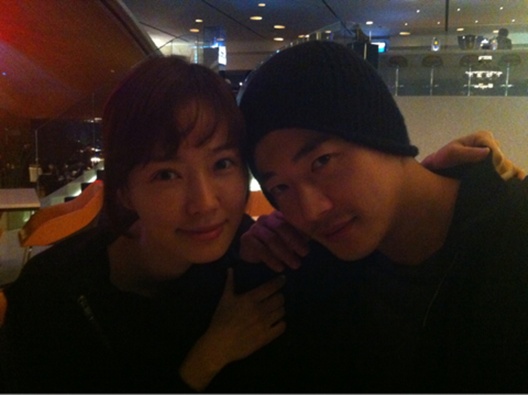 A recent picture of kwon Sang-woo and Son Tae-young is drawing attention.

Pianist Yiruma put up on his Twitter on the 5th, "I had dinner with my sister-in-laws. It was a lovely weekend...they look so pretty together!" Yiruma married Son Tae-young's sister Son Hye-im in 2007 and is brother-in-law with kwon Sang-woo.

In the picture is kwon Sang-woo and Son Tae-young, now 3 years into the marriage, with their faces close together showing love. Son Tae-young has her left arm around kwon Sang-woo's shoulders and her left hand is holding his arm. He is wearing a beanie and she is as always beautiful as ever.

Those who have seen this picture say, "Ther are such a pretty couple! I'm jealous...", "They look like they're still just married", "Yiruma your couple is pretty too~".

Meanwhile, kwon Sang-woo and Son Tae-young married in 2009 and have a 1-year-old son named Luke.

"Kwon Sang-woo and Son Tae-young, despite 3 years in marriage "Still honeymoon couple""
by HanCinema is licensed under a Creative Commons Attribution-Share Alike 3.0 Unported License.
Based on a work from this source