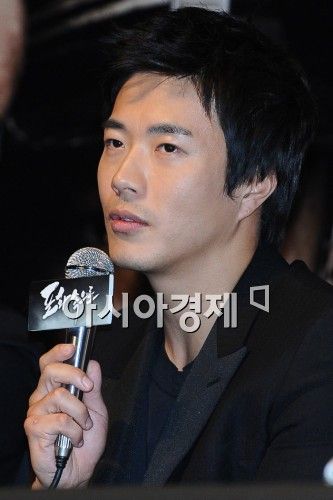 Korean actor kwon Sang-woo, who was indicted on charges of fleeing after colliding his car into several vehicles over a month ago, has received a fine of five million won for the incident.

The Seoul Central Prosecutors' Office announced Tuesday that they have summarily indicted the actor for violating traffic laws on the count of not taking immediate action after an accident.

Late last month, it became belatedly known that the actor had crashed into several vehicles including a police car near Seoul's Cheongdam-dong district during the early hours of June 12 and fled the scene soon after.

Police had initially said Kwon had collided into a parked car when they discovered him driving on the wrong side of the road, then ran his car into the police vehicle trying to back out from the collision, and drove away for about 300 meters before hitting a flowerbed.

He abandoned his vehicle and fled the scene, showing up at the police station two days later to undergo investigation for the incident.

At the time, the actor reportedly told the authorities, "The police car was following me and I got scared... I was not drunk driving".

He was only charged for the hit-and-run since the police could not check his alcohol level at the time of the accident.

The following week, the case was turned over to prosecutors as an incident in which Kwon did not take immediate action for the damage he inflicted.

An official at Seoul's Gangnam Police Station explained the actor had crossed over a centerline to turn into an alley, as opposed to driving on the opposite side of the road, adding that he is likely to receive a fine for the incident since there were no casualties involved and damage was done only to property.

Authorities then called in the actor for investigation on July 9, but were unable to find evidence that he had been drunk driving at the time he caused the accident.

Kwon himself is also said to have vehemently denied that he had been under the influence of alcohol.

The 33-year-old actor shot to fame throughout Asia after starring in the 2003 TV series "Stairway to Heaven", which co-starred another Hallyu star Choi Ji-woo.

He recently starred in war pic "71-Into the Fire" and will be appearing in upcoming TV series "Daemul - Big Thing" alongside top Korean actress Go Hyun-jung.