"Kwon Sang-woo's Stamp" to be issued in Japan 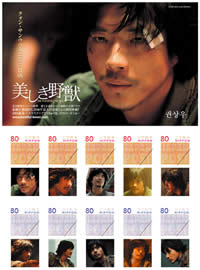 "kwon Sang-woo's Stamp" (3,150 yen) will be issued in Japan prior to screening of action noir movie "The Wild beast" (Director Kim Seong-so, Production Popcorn Film) next February in Japan.

Kwon's brand-new role in his latest movie attracted the attention as he transformed himself from his established soft image in an opposite way and challenged a new role full of unpolished beauty. He'll fully show his "Ubersexual" fascination, which is wild, but soft in the stamp as well.

The design of stamp will be oriented to Kwon's images in "The Wild beast". It will be put on sale from Jan. 31 next year and the reservation is available from Nov. 25 in Japanese nationwide post offices and from Dec. 1 in all branches of the convenience store "Lawson".

The Kwon's stamp is produced as the third one of "Hallyu! Entertainment Stamp Series" by Digitalcheck Inc. of Japan, which presented the ones of actor Jo Han-sun in "Romance Of Their Own" - "Temptation of Wolves" and Jee Jin-hee in "Dae Jang Geum".

The movie story is about an activity of a gumshoe Jang Do-young featuring kwon Sang-woo and a prosecutor Oh Jin-woo featuring Yoo Ji-tae who has a strong sense of justice against the underground and a big wig. The Kwon's special stamp would be a good present to Japanese fan who cannot wait until his movie screening.

""Kwon Sang-woo's Stamp" to be issued in Japan"
by HanCinema is licensed under a Creative Commons Attribution-Share Alike 3.0 Unported License.
Based on a work from this source