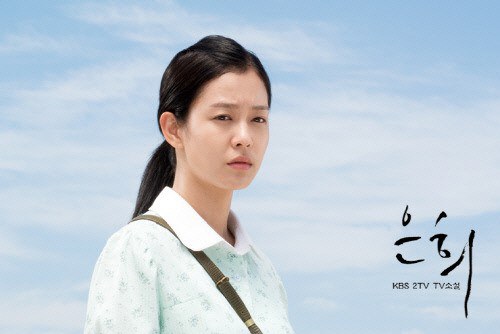 KBS 2TV morning drama "Eun-hee" is showing signs of increasing in percentage. It went up from 9.1% to 9.9%. With a double digit percentage right there, it is expected to climb further up. "Sam-seng" which was the previous drama, recorded an average of 14.5% and ended with 18.4%.

Kyung Soo-jin takes on the role of Eun-hee and she takes up a good weight of the drama. This drama portrays the neighborhood in the 1960's ~ 1970's. Eun-hee is a character who had to had to flee from her hometown 10 days after she was born and lost her father and earned money for the family, even giving up her education. She has to act out a time period she's never experienced before but she's willing to take it on for the next 120 episodes.

Kyung Soo-jin claimed that she believes this is an opportunity and she'll be experiencing an indoor set for the first time but she's working very hard.

Kyung Soo-jin was known as the Son Ye-jin look-alike since she debuted and also acted out Son Ye-jin's younger version in the KBS 2TV drama "Shark". She's starred in KBS 2TV drama "The Equator Man" and SBS "That Winter, the Wind Blows".

"Kyung Soo-jin, Son Ye-jin look-alike stars as Eun-hee"
by HanCinema is licensed under a Creative Commons Attribution-Share Alike 3.0 Unported License.
Based on a work from this source