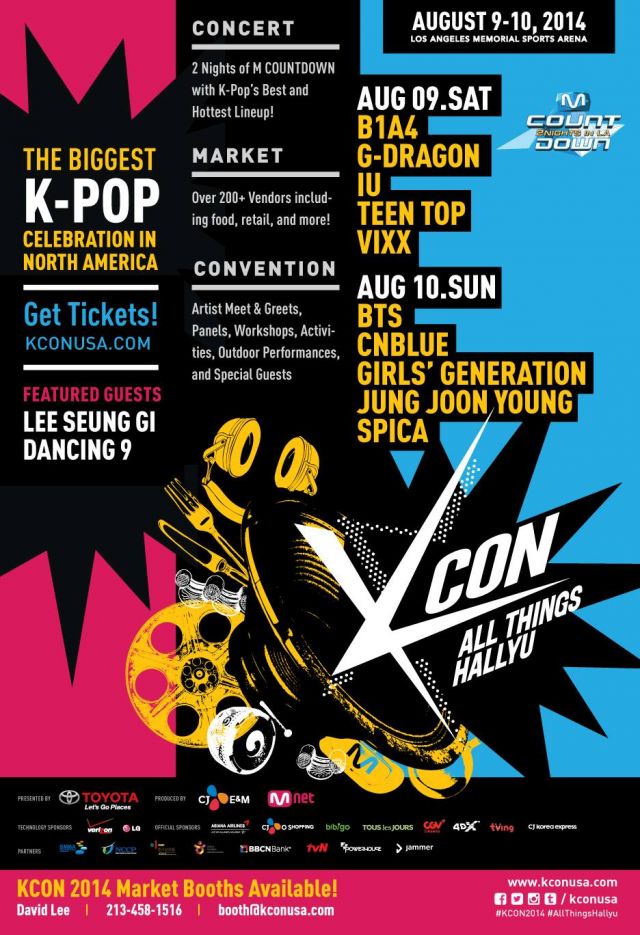 A Larger Convention with More Panels, Workshops and Special Guests from Across Hallyu like K-Drama star, Lee Seung Gi All Scheduled for August 9 and 10 in Downtown L.A.

Returning to the Los Angeles Memorial Sports Arena in Downtown Los Angeles on August 9-10, KCON 2014 is where "All Things Hallyu" will converge for two days of unforgettable concerts, panels, workshops, food, fashion, and much more.

The KCON 2014 artist line-up features the hottest acts in K-pop including four acts to have never before played in the United States – BTS, IU, Jung Joon Young, and SPICA. A full performing artist breakdown for KCON 2014 is as follows:

Fans can expect an even bigger event than last year with double the number of panels, workshops and outdoor stage performances aimed at giving attendees the unique access that only KCON can offer.

Going beyond the music, KCON 2014 is bringing one of the biggest stars from Korea's top rated shows to make a special appearance. Lee Seung-gi will bring the best of K-Drama to the convention that is already jam-packed with big names. Also for the first time, KCON 2014 is bringing over some of Korea's biggest YouTube stars - YD, BuzzBean11, Beautifymeeh, Ssin, Korean Englishman, Dave, K-Tigers. All of these YouTubers are part of the Creator Group, Asia's #1 multi-channel network (MCN).

Over 20,000 fans from all across the world attended last year, doubling attendance from the previous year, and KCON is excited to welcome even more fans this summer. For more information and updates on the convention please visit www.kconusa.com.

"Largest K-pop Fan Convention In North America Reveals Full Artist Line-up As Individual Tickets Go On-sale July 3 At 10 A.m. Pt"
by HanCinema is licensed under a Creative Commons Attribution-Share Alike 3.0 Unported License.
Based on a work from this source