Learn Which Residential Areas Are Hot Among The Stars 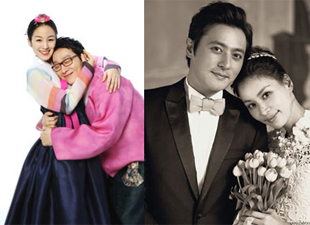 The lives of celebrities never fail to intrigue the regular Joes out there. Much attention is paid to what they do, who they date, and where they live. Being that celebrities tend to seek out homes that are appropriate for their higher salaries in quiet neighborhoods where they can live out their private lives in peace, many coincidentally flock to the same buildings or areas.

For example, two very famous Korean star couples live in the same luxury-style villa in Samsung-dong of Seoul: comedian Lee Hwi-jae and his wife, and Korea's Brangelina, Jang Dong-gun and Ko So-young. Jang and Ko moved into Lee's building last April to live right beneath him. There are rumors that the two couples get together often due to their shared love for baseball.

Similar to Lee Hwi-jae and Jang Dong-gun, there are a few other stars that live in Samsung-dong.The I-Park building is so popular among the stars that it's known as the "celebrity apartment". Actress Jun Ji-hyun, Lee Mi-yeon, the kwon Sang-woo and Son Tae-young couple all live within the building. In the same area although different buildings, live singer Rain, Song Hye-kyo, and Son Ye-jin.
Before Jang and Ko moved to Samsung-dong, they lived in another luxury-style villa located in Heukseok-dong. This place was known at one point to be "a pretty boy's (aka flower boy in Korea) hangout" and "hunk heaven villa". This was mainly because of two very well-known "flower boys" or hunks, actors Hyun Bin and Lee Min-ho. Literally a "flower boy" -- a star in the popular drama "Boys over Flowers" -- Lee Min-ho is actually originally from Heukseok-dong with his high school pal and actor, Jung Il-woo.

According to last year's reports from the Ministry of Land, Trasnport, and Maritime Affiars, the actor who lives in the most expensive home is Jo Young-nam, age 66. Jo lives in a 187 pyeong (a Korean unit of measurement equivalent to 3.3058 m2, 3.954 sq yd or 35.586 sq ft) luxury-style villa located in the glamorous Cheongdam-dong area of Gangnam, Seoul. The market price on the home is about 6 billion won. In this building that overlooks the Han River for a gorgeous view lives Jo's neighbor, Han Chae-young and her husband.

Also in Cheongdam-dong lives Sol Kyung-gu and his wife Song Yoon-ah, who used to reside in Nonhyun-dong of Gangnam, Seoul. The reason for the couple's move was for better education for their child, born in August of last year. Within the building of their new home lives popular singer-actor Kim Hyun-joong, leader of SS501. As if that wasn't enough star power in one building, famed beauty Hwang Shin-hye also calls it home. Though it's located right in the busy city of Seoul, there's a small little garden within the villa which allows for a nice relaxing setting for the stars to enjoy.

Outside of the entertainers' realm, figure skating queen Kim Yuna lives in Yeouido. A former resident of Gun-po in Gyeonggi, Kim moved into a large-scale complex with her family a few years back. Within this complex lives singer Lee Hyun-woo-I and his family. Province. Lee is such a regular within this complex that features a variety of shops and services, he even is known to be a regular at a hair salon located in the basement floor of his apartment building.

Back in the Gangnam area, sits another building that's nicknamed "the celebrity apartment". Just the appraised value of the land itself is over 4 billion won! So which actors can afford such a glitzy pad? Movie stars that display some of the best chemistry on screen, Park Joong-hoon and Ahn Sung-ki each own a home there. Also, actor Shin Hyun-joon, the Yoon Tae-young and Im Yoo-jin couple, along with movie director Shim Hyung-rae.

One area that was reputed as a luxurious residential area is Apgujeong. And there are few stars that represent the cream of the crop of the Korean entertainment industry like MC Yoo Jae-suk and MC Kang Ho-dong who each live in high-rise apartment buildings. Kang moved into a 3.2 billion won apartment. Apart from these two lives TV personality No Hong-chul and actress Kim Hee-ae all in the Apgujeong area.

Another area that's a celebrity favorite is Seo-rae Village in Bangbae-dong. The Little France of Seoul houses TV personality Kim Je-dong, singer Haha (Haha), and rapper Gil. These three aren't shy of talking about how they're neighbors in this area even on air. The Choi Soo-jong and Ha Hee-ra couple, Jo Yong-pil, Ha Ji-won, Kim Jung-eun, Lee Seo-jin, and Jung Woo-sung all also live here.

The Gangnam area was always sought after by entertainers because of better privacy and security. However, these days, other factors such as scenery and view are being taken more and more into consideration. One area that has security and beauty is Hannam-dong. Just a few months ago, Big Bang's TOP (Choi Seung-hyun) moved into this area into a 3 billion won villa. Nearby live the Jung Joon-ho and Lee Ha-jung couple, actress Lee Young-ae, actress Soo Ae, and one of the most representative Korean beauties Kim Tae-hee.

Nearby is another area called Dongbu Ichon-dong which is another favorite for the beautiful outlook of the Han River. Some of the most well-recognized faces in this area are comedian Lee Kyung-shil, actress Jang Mi-hee, the Tak Jae-hoon and Lee Young-ja couple, and even the father-and-son power duo Tae Jin-ah and Eru.
Outside of Seoul is an area that's also considered to be "hot" among the stars: Ilsan of Goyang City. The apartments are spaced more liberally, the streets are quieter, and the scenery is nice. Singer Yang Hee-eun discovered Ilsan's charms early on and has been living there since the late 1990's. Through word of mouth, Ilsan was able to attract the comedian Park Mi-sun and her husband Lee Bong-won and movie star Lee Sung-jae.

"Learn Which Residential Areas Are Hot Among The Stars"
by HanCinema is licensed under a Creative Commons Attribution-Share Alike 3.0 Unported License.
Based on a work from this source