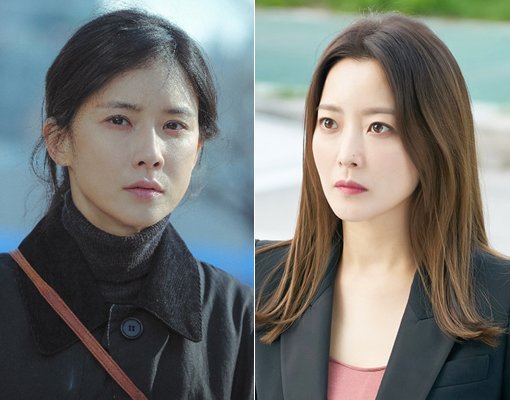 Actors Lee Bo-young and Kim Hee-sun are coming back with different stories. They return to drama after two years, preparing to meet with viewers through new stories and roles.

First Lee Bo-young stars in the new tvN drama "When My Love Blooms" and Kim Hee-sun is looking forward to the release of the SBS drama "Alice", which is due later this year. The two actors, who received high ratings for their stories and also received favorable reviews in terms of acting, will try to change the mood this time.

Lee Bo-young falls in love with Yoo Ji-tae in "When My Love Blooms". It's a story about a man and a woman who are each others' first loves, meeting again 20 years later and sharing deeper love. Lee Bo-young starred mostly in genre dramas and motherly-love dramas such as "Mother - Drama", "Whisper" and "God's Gift - 14 Days".

This is her first traditional melodrama since the 2012 "The Equator Man". This new drama is also a love story of the 40s, an unusual case. Lee Bo-young explained her reason for choosing the drama saying, "I was attracted to her because she is tough, both outside and inside and doesn't fall under difficult circumstances".

Kim Hee-sun, who starred mostly in psychological dramas, is attempting a fantasy called "Alice". "Alice" is about a man and a woman who part forever through death, going beyond dimensions and meeting once again, like magic. She's currently in filming with her co-star Joo Won. She takes on the role of a geeky physicist who holds the secret to time travel and manages characters from their 20s to 40s. This wouldn't have been easy if not for her never-aging looks.

"Lee Bo-young and Kim Hee-sun Return With Different Stories"
by HanCinema is licensed under a Creative Commons Attribution-Share Alike 3.0 Unported License.
Based on a work from this source