Lee Byung-hun and Psy meet in US 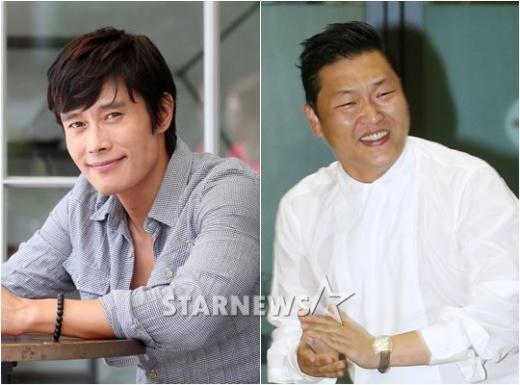 Lee Byung-hun from "Masquerade" and "Gangnam Style" Psy will be meeting in America at the press releasing event of the movie "Masquerade" on the 14th.

While this event if planned to be held at the LA Country Museum of Arts (LACMA), Psy is going to visit his old friend Lee Byung-hun.

In an interview with S tar News, Lee Byung-hun said, "When the LA schedule had been set Psy called and said he'll be in LA so I told him to come".

Lee Byung-hun and Psy are unique friends. They haven't been close for long but they talk on the phone and drink wine together. Lee appeared in the supporting video for Psy's "Gangnam Style" when it first came out.

"Masquerade" is a fiction historical about a poor man sitting in place of the real king who was being threatened of death. To be released on the 13th.

"Lee Byung-hun and Psy meet in US"
by HanCinema is licensed under a Creative Commons Attribution-Share Alike 3.0 Unported License.
Based on a work from this source