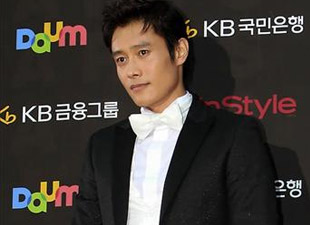 After spending the past five months in New Orleans of the the United States shooting for the Hollywood movie "G.I. Joe 2", Lee Byung-hun finally returned home on November 21st.

As soon as Lee touched Korean soil, he was busy as the recipient of the Presidential Award for advancing Korean pop culture and arts.

According to the Ministry of Culture, Sports, and Tourism, Lee was selected as one of the 2011 Korean stars who helped to spread Korean pop culture and arts, along with singer Kim Gun-mo and comedian Kim Byung-man. Past recipients include comedian Nam-chul, model Do Shin-woo, music producer Park Jin-young and Yang Hyun-suk, and movie director Hong Sang-soo. Aside from the Presidential Award, there's also the Prime Minister Award, which included past recipients like radio DJ Kim Gi-duk, voice actor Kim Soo-hee, singer Jung Soo-ra and Girls' Generation, film producer Shin-chul, composer Shim Sung-rak, actor Yoo Dong-geun, and drama producer Lee Jin-suk.

Lee will also be attending the 2011 Mnet Asia Music Awards taking place in Singapore on November 28th as an award presenter. Not long after that, the talent has a three-city tour and six-stop of fan meetings scheduled in Japan this December. As for early 2012, in February, Lee will start the shooting of his first Korean historical drama (aka "sa-geuk"), "Masquerade".

"Lee Byung-hun Awarded Presidential Award"
by HanCinema is licensed under a Creative Commons Attribution-Share Alike 3.0 Unported License.
Based on a work from this source