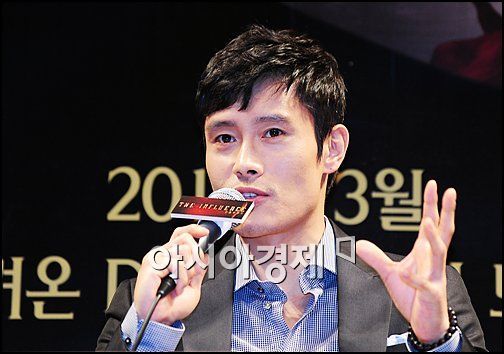 Top Korean actor Lee Byung-hun has warned fans that multiple fake Twitter accounts opened up under his name are fake, according to his agency on Thursday.

"We heard about Lee's [fake] Twitter accounts so we are informing fans that 'Lee Byung-hun does not use Twitter'. We hope fans don't get taken advantage of", BH explained.

The agency did, however, confirm that Korean director Jin Won-seok, a close friend of the actor, had written a message his own Twitter account claiming that Lee's accounts are all fake.

A Twitter account can easily be opened -- with just an email address and ID -- on the popular U.S.-based online social networking and microblogging service.

Several Korean stars including actor Lee Min-ho, singer Son Dam-bi and pop group Girls' Generation have reportedly been taken advantage of by people who opened up accounts in their names.

Lee, 39, has long been considered one of the most successful actors in Korea with dozens of television dramas and films under his belt, most recently the KBS blockbuster TV series "IRIS" (2009).

He had a particularly successful year in 2009, making his Hollywood debut in action flick "G.I. Joe" and co-starring with Josh Hartnett and Takuya Kimura in the film "I Come With The Rain".