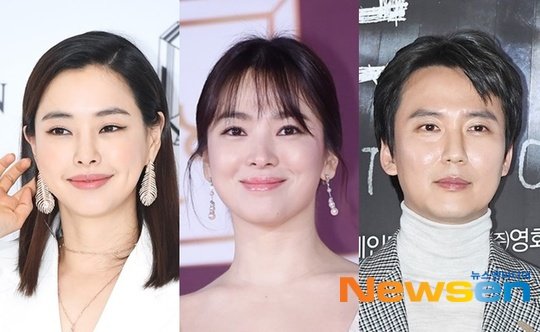 The new SBS Friday-Saturday drama "One the Woman" begins on the 17th of September at 10 PM. "One the Woman" is a comic buster that depicts the story a chaebol daughter-in-law and a corrupt female prosecutor who look the same, switching lives due to memory loss.

Lee Hanee the leading actress plays Jo Yeon-joo, the corrupt female prosecutor with a bad temper. At the same time, she plays two roles as Kang Mi-na, the daughter-in-law of a chaebol family who lives like Cinderella amidst ill-treatment.

Lee Hanee who played a detective in "Extreme Job" and a prosecutor in "The Fiery Priest", is expected to reach the peak with "One the Woman". At the press premiere, Lee Hanee said, "I've put all the comedy I have in this. It's like the past works were likes puzzles that led to this.

Song Hye-kyo will fill in the space after Lee Hanee. She's coming back with "Now, We Are Breaking Up", is a sweet, salty, spicy, and sour breakup version of "Love Actually". Song Hye-kyo takes on the role of Ha Yeong-eun, a fashion company design team leader. She's a cold realist and Song Hye-kyo expresses the subtle psychology of a woman who is shaken by love that has come without notice.

Jang Ki-yong, the male lead of "Now, We Are Breaking Up" has left for military even before the beginning of the drama. However, before he left he completed the press premiere and production of the drama so there shouldn't be a problem for the viewers watching the drama.

After Song Hye-kyo comes Kim Nam-gil with "Through the Darkness" as a profiler. The drama is based on an original non-fiction novel about the country's first profiler who struggles to read the minds of serial killers. It's Kim Nam-gil's first drama in two years since the 2019 drama "The Fiery Priest".

From comedy to mellow to genre, Lee Hanee, Song Hye-kyo and Kim Nam-gil will fill-up the rest of the year with SBS dramas.