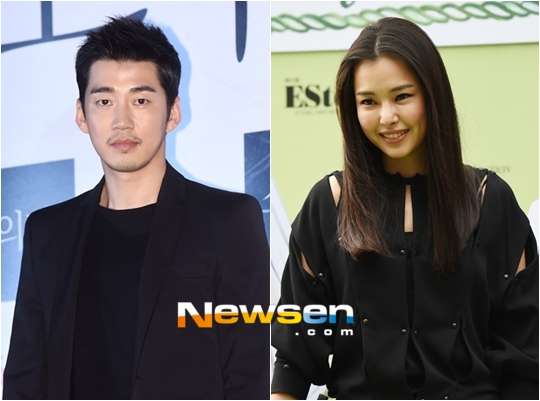 Lee Honey appeared at the VIP preview for 'Minority Opinion' to support her lover Yoon Kye-sang.

While numerous VIP guests attended the event to watch 'Minority Opinion', Yoon Kye-sang's lover Lee Honey did not show up for photo wall event, which made people wonder why.

According to a staff from the venue, Lee Honey did not go on the stage for photo wall event. She showed up quietly at the theater right after the main actors of the movie greeted the audience on the stage.. Lee Honey sat in the back of the theater alone and watched the movie. Although she wore a casual shirt and a pair of pants all in black, Lee Honey was recognized easily because of her radiant beauty.

With Lee Honey's strong support, Yoon Kye-sang watched the movie along with actor Kwon Yool from his agency as well as other close friends in the middle of the theater.

'Minority Opinion' is by director Kim Seong-je, who was in charge of cinematic adaptation and directing of 'Blood Rain'. The movie is based on the tragic accident in Yongsan.

It depicts an unprecedented legal battle between a group of lawyers and national prosecutors, over one hundred one (one dollar approx.) surrounding the death of a sixteen year old boy expelled from expropriated town and a twenty old police officer on mandatary national duty, who were ignored by law.

Yoon Kye-sang Yoo Hae-jin, Kim Ok-vin, Lee Kyung-young, Jang Gwang, Kim Eui-sung, Kwon Hae-hyo and other actors star in the movie. Since the movie started filming in June 2013, the movie changed its distribution company from CJ E&M to Cinema Service. It took two years to complete the production and the movie is finally released on June 24th finally.

"Lee Honey supports lover Yoon Kye-sang quietly at 'Minority Opinion' VIP preview "
by HanCinema is licensed under a Creative Commons Attribution-Share Alike 3.0 Unported License.
Based on a work from this source