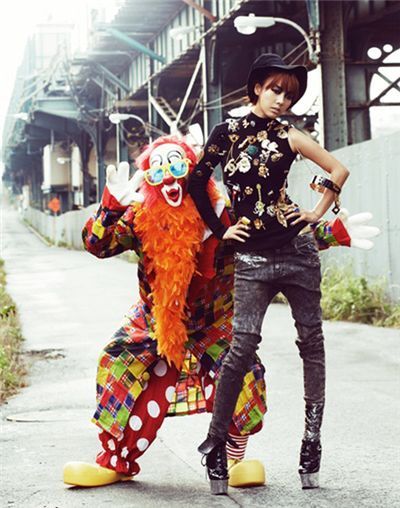 Korean queen of pop Lee Hyori has ascended her way up to the top of Gaon's singles chart for the week of April 4 to 10 with her latest single "Swing".

The songstress scored her first win during the second week of April, scaling up 11 spots on the music chart to beat out last week's winner Rain.

The new song by Lee has been gaining popularity since its release earlier this month on online music sites. She will be making her stage comeback today on the televised music program "Mnet Countdown".

Rounding out the top three singles were Rain's new tune "Love Song" which stood in second followed by After School's "Bang".

Meanwhile, Rain's newly released special album "BACK TO THE BASIC" bowed into the top slot on Gaon's album charts.

The recent digital single "Blowin My Mind" by R&B trio Brown Eyed Soul positioned itself in second place and the special album "Festa on Ice 2010" featuring tracks from girl group Brown Eyed Girls entered the chart at No. 3.

The Gaon music chart, considered the Korean equivalent of the U.S. Billboard chart, was launched last month. Its data has been accumulated from online and offline sales statistics from the country's major web-based providers and record distribution companies.

"Lee Hyori rules singles chart with "Swing""
by HanCinema is licensed under a Creative Commons Attribution-Share Alike 3.0 Unported License.
Based on a work from this source