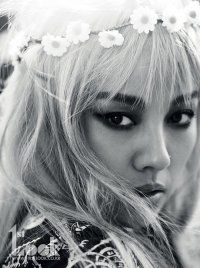 One of the hottest domestic stars, Lee Hyori will be paid top dollar for her third year modeling for Samsung Electronics Anycall commercials. Her agency Mnet Media on Monday said Lee recently signed one of the country's highest-paying one-year contracts with Samsung Electronics. With this, she will now be entering her third year of modeling for the phones. Lee, who left an impression with her work in the company's previous "Anymotion" and "Anyclub" commercials, will be at it again, this time in a spot to be called "Anystar". She is working with actor Lee Joon-gi in this installment, which will be hitting the airwaves in late December.

Meanwhile the episode to be filmed on Dec. 29 of KBS 2TV's "Happy Together-Friends" that she has been hosting will be her last.