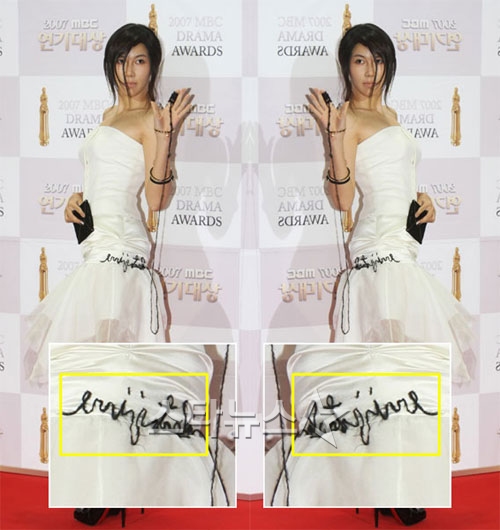 Is there Seo Taiji in Lee Ji-ah? There is!

On the dress she wore to the end of the year MBC Awards in 2007 were the letters "Leejiatoes". It reads "Lee Jia's toes".

As the truth that they were once married came out, netizens read the lettering the other way round, which then reads "seotaijee" without the L.

Previously some netizens even suggest that Seo Taiji might've named her stage name for her too.

Many netizens say 'seo tai ji' backwards spells 'I ji a' so he might've given her the name "Lee Ji-ah".

Her management explained that wasn't true.

Meanwhile, Lee Ji-ah and Seo Taiji got married in America in 1997 and Lee Ji-ah filed for divorce in 2006. She then filed for alimony and division of possessions in January for the amount of 5.5 billion won.

"Lee Ji-ah dress, "Seo Taiji" was it a sign?"
by HanCinema is licensed under a Creative Commons Attribution-Share Alike 3.0 Unported License.
Based on a work from this source