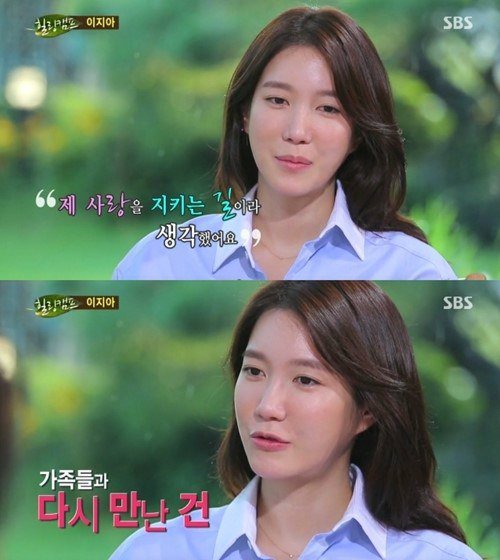 Lee Ji-ah appeared in the SBS show "Healing Camp" on the 11th. She talked about the news report of her and Seo Taiji's divorce while seeing Jung Woo-sung.

She spoke her mind about having to hide with someone who everyone in the country knew about.

The MC's asked, "Is that why you had to give up love for a second time?" and Lee Ji-ah answered, "The people didn't want to know the truth. They only wanted to hear what they wanted to know. I bet he didn't say much for me. But that just caused more rumors and misunderstandings. Still, I think I did the right thing. I also think I did the right thing by breaking up with him".

Lee Ji-ah said, "I was still alright with him [Jung Woo-sung] after that. But people started saying that we broke up".

"When we actually broke up, people started saying we were together again. Three were rumors about me being pregnant too. Paparazzi was onto me and took pictures of me drinking one day. Then they reported that I wasn't pregnant. How can we be friends now?"

Netizens say, "Lee Ji-ah, Seo Taiji and Jung Woo-sung, you poor things", "Did she let it all out?" and more.

"Lee Ji-ah mentions Jung Woo-sung and Seo Taiji"
by HanCinema is licensed under a Creative Commons Attribution-Share Alike 3.0 Unported License.
Based on a work from this source