Lee Jong-suk Is an Author 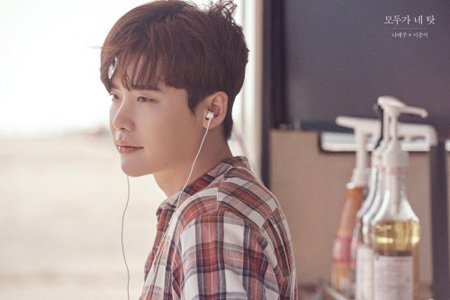 YG Entertainment announced that Lee Jong-suk published a collaborative book of poems with poet Na Tae-joo entitled, "Everything Is Your Fault".

The actor announced the book on his Instagram. "The teaser will be released first, but it may be the first and last time I do this project".

"Experiencing something like this made me realize how great writers are for going through this difficult process. I hope the book is relatable and comforts many people. Thank you, Na Tae-joo, my teacher!"

Lee Jong-suk and Na Tae-joo first met in 2013 when Lee Jong-suk was in the KBS 2TV drama "School 2013". Lee Jong-suk quoted a poem from Na Tae-joo's "Grass Flower" and said he felt like he was being comforted through his words.

"Everything Is Your Fault" contains sixteen of Na Tae-joo's works including "Grass Flower" and "Me To You". Within those, five pages are dedicated to Lee Jong-suk's favorite poems. Every chapter has a short blurb describing how he feels about the poems.

Meanwhile, Lee Jong-suk was recently in the SBS drama "While You Were Sleeping - 2017" as Jeong Jae-chan.

"Lee Jong-suk Is an Author"
by HanCinema is licensed under a Creative Commons Attribution-Share Alike 3.0 Unported License.
Based on a work from this source