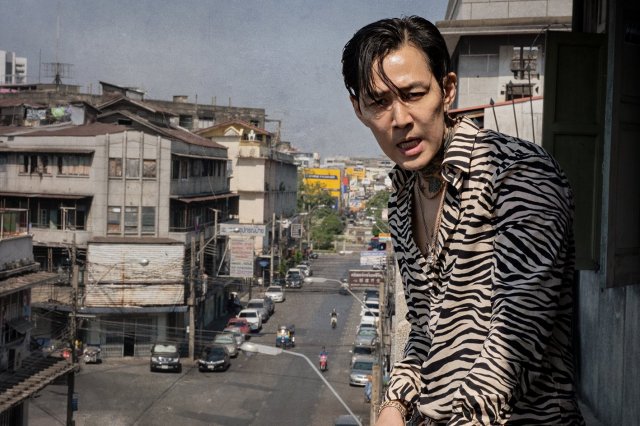 Actor Lee Jung-jae is consolidating his filmography with another villainous role in his upcoming film "Deliver Us From Evil" set for release next week.

In the action film, in which he is being reunited with Hwang Jung-min after their 2013 hit film "The New World", Lee plays a ruthless killer chasing a hit man who killed his brother, traveling all the way to Thailand to avenge his brother's death.

Lee, who used to appear in melodramas, mostly took on villainous roles in recent years. When asked about how he feels about his previous films like "The Face Reader" and "The Assassination" in which he played bad guys, Lee said, "I'm a bit worried about being typecast as a villain".

He added, "When playing a villain, there's room to use your imagination to make the character more interesting. Not to mention various props, I tried out many things such as clothes, accessories, tattoos and even once wore a pink wig to create some mystique".

"Deliver Us From Evil" is packed with action scenes including fistfights, gunfights and car chases. Lee even ruptured his shoulder while shooting scenes. "It matters to have a lot of spectacular action and stunts, but at the same time I wanted to portray a cruel look that is immediately recognizable", he said. "My role is like a beast who enjoys hunting. I put a lot of efforts to make facial expressions that would allow viewers to interpret the role by just looking in his eyes".

The new film by Lee's close friend and actor Jung Woo-sung, "Steel Rain 2: Summit", was released early this week, about two weeks ahead of his film, which will hit theaters on Aug. 8. "Rather than competing with each other, both of the films can be a boost for the ailing film industry [due to the coronavirus epidemic]", he said.

Lee is also preparing his directorial debut with an aim to release his own movie sometime next year. "Jung has been rejecting my offer for four years. He simply says he is thinking about it. I hope he will make up his mind soon", Lee said.

"Lee Jung-jae Worries About Being Typecast with Another Villainous Role in New Film"
by HanCinema is licensed under a Creative Commons Attribution-Share Alike 3.0 Unported License.
Based on a work from this source