Lee Min-ho in the middle of "The Heirs" 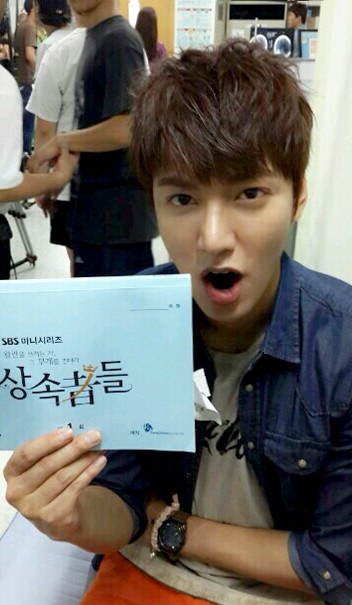 Lee Min-ho looks as young as ever.

Lee Min-ho posted a picture of himself holding the script of "Those Who Want the Crown, Withstand the Weight of it - The Heirs" and said, "Heritors! One who wants to wear the crown, bear the crown. First filming day".

He lost some weight through dieting and his brownish hair looks nice with his slimmed down face.

Lee Min-ho is the leading actor in the SBS drama "Those Who Want the Crown, Withstand the Weight of it - The Heirs" which is to be broadcasted on the 9th of October. "The Heirs" is about the life of wealthy kids from wealthy families. It is produced by Kang Sin-hyo and written by Kim Eun-sook, starring Park Shin-hye, Choi Jin-hyuk, Kim Sung-ryung, Yoon Son-ha, Kim Woo-bin, Park Hyung-sik (ZEA), Krystal (FX), Kang Min-hyuk (CN Blue) and more.

"Lee Min-ho in the middle of "The Heirs""
by HanCinema is licensed under a Creative Commons Attribution-Share Alike 3.0 Unported License.
Based on a work from this source