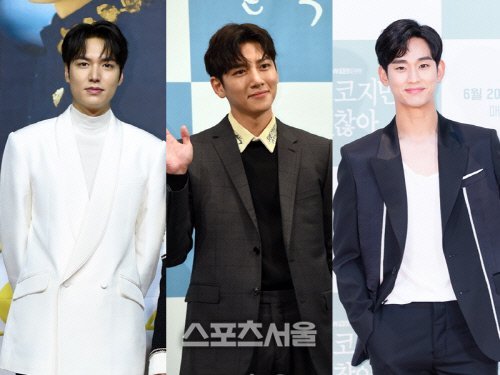 Lee Min-ho (33), Ji Chang-wook (33) and Kim Soo-hyun (32) return to the small screens after being discharged from the military. The three are the leading Korean stars in the Korean entertainment industry with a strong fan base at home and abroad. Some have already achieved painful achievements and others are about to launch a new work in anticipation, but they have something in common in that it is time for a new leap towards the 'long run' as actors beyond the name of 'Hallyu Stars'.

Lee Min-ho returned with SBS's "The King: Eternal Monarch", but struggled. The reunion with star writer Kim Eun-sook from "The Heirs" drew high expectations, but it ended bitterly amid falling ratings due to controversies surrounding the worldview, love line and excessive indirect advertising that was hard to understand.

Lee Min-ho's shoulders have become burdened. Lee Min-ho, who returned to the small screen after a long time, displayed an outstanding performance, but on the other hand, it was regrettable that he did not get more distance from the characters he played in his 20s, such as Goo Joon-pyo of KBS2's "Boys over Flowers" and Kim Tan of SBS's "The Heirs".

Another Hallyu star, Ji Chang-wook, will appear in SBS's new Friday-Saturday drama "Backstreet Rookie", which will air on the 19th. Ji Chang-wook, who earned the modifier 'Melo Master' by hitting KBS2's "Healer", tvN's "The K2" and SBS's "Suspicious Partner", challenged another romantic role with tvN's "Melting Me Softly" last year after his discharge, but was let down by its poor performance in the 3% range.

This year's first comeback drama, "Backstreet Rookie" is a romance drama based on a popular webtoon about what happens when a female owner enters a convenience store run by a male lead as a part-timer. Ji Chang-wook will play a handsome, but sloppy role as the branch manager of the convenience store, creating sympathy by covering various aspects of young people. Above all, it seems that the key is the chemistry of romance with his co-actress Kim Yoo-jung.

Kim Soo-hyun is also making a comeback. He will collaborate in the new tvN Saturday-Sunday drama "It's Okay to Not Be Okay" with Seo Ye-ji, in which Moon Gang-tae (Kim Soo-hyun), a mental ward guardian who refuses to love under the weight of a heavy life, and Go Moon-yeong (Seo Ye-ji), a fairy tale writer who doesn't know about love due to a natural defect, heal each other. In particular, Kim Soo-hyun, who returns after five years since KBS2's "Producers", has been attracting the attention of prospective viewers from the news of the casting to each teaser. In particular, expectations are growing even more as Kim Soo-hyun made short appearances here and there by appearing on tvN's "Hotel Del Luna" and "Crash Landing on You".

Kim Soo-hyun is also under a lot of pressure ahead of the release of his return drama. This is the first drama to be released after he announced his fresh start with Gold Medalist, a new agency, leaving Keyeast, his long-time agency, and the industry is paying attention to Kim's return to the small screen after Lee Min-ho and Ji Chang-wook's works' poor performance. Attention is focusing on whether Kim Soo-hyun, who has made box office hits in each drama he stars in, from MBC's "The Sun and the Moon" and SBS's "My Love from the Star" to the films "The Thieves" and "Secretly and Greatly", will be able to prove his true value again.

"Lee Min-ho, Ji Chang-wook and Kim Soo-hyun are actors who have already proven their acting skills, star quality and popularity through their previous works", an entertainment industry source said. "While billions of won in their value proves this, it is also a task for those in their 30s to overcome the burden of growing their acting skills and performance to fit their reputations. This is why some say that we need to break the mold of the character that was popular in our 20s and try new things and challenges".