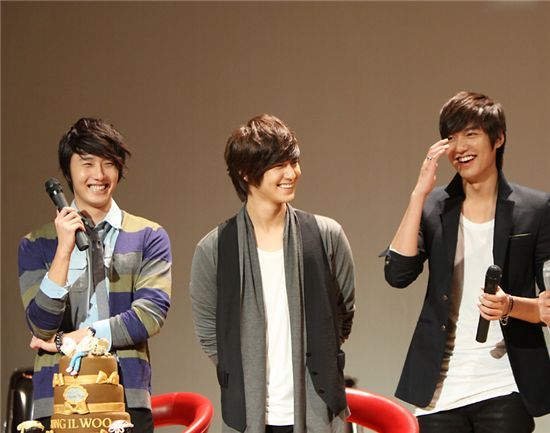 Korean heartthrobs Lee Min-ho and Kim Beom made a surprise appearance at actor Jung Il-woo's fan meeting held over the weekend, according to Jeong's agency N.O.A Entertainment on Monday.

Lee and Kim, co-stars of last year's smash hit series "Boys over Flowers" and best friends with Jeong, turned up at the meet and greet also held in time with Jeong's 23rd birthday.

"We have known Jeong for a while now but we have never seen these sides to Jeong before. It is great to see how passionate he can be for his fans", the two said of the various events Jeong prepared for the fan meeting after congratulating him on his birthday.

For the fan event, held for the first time in two years, Jeong played the original soundtrack to movie "Love Affair" on the piano as well as singing and dancing to "Candy in my Ear" with female songstress Baek Ji-young.

"It must've been because I was very nervous about meeting my fans for the first time in a while but I'm a bit disappointed that I wasn't able to do as well as I had done when preparing for the fan meeting", Jeong said afterwards. "I'm rather more moved by my fans because despite that, my fans seemed to enjoy it and were touched by the effort I put into the preparations".

Jeong became a household name after appearing in the popular MBC sitcom "High Kick!" (MBC, 2006) and has since starred in several other dramas including "Iljimae Returns - Moon River" (MBC, 2009) and "My Fair Lady" (KBS2, 2009).

He is currently looking at several scenarios and synopses for his next acting role. 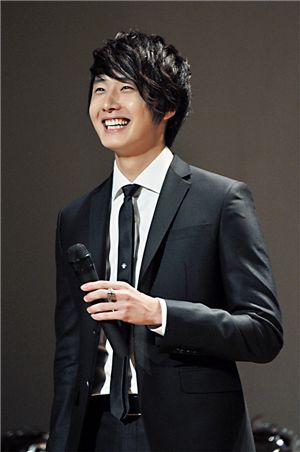 Actor Jung Il-woo at his fan meeting held at the Broadhall in Seoul, South Korea on September 5, 2010. [N.O.A Entertainment]

"Lee Min-ho, Kim Beom surprise visit Jung Il-woo fan meeting"
by HanCinema is licensed under a Creative Commons Attribution-Share Alike 3.0 Unported License.
Based on a work from this source