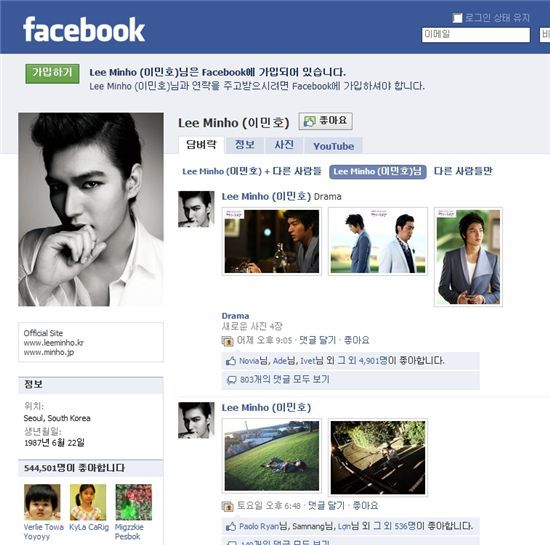 Korean actor Lee Min-ho is making news for attracting over half a million fans to his official Facebook page (http://www.facebook.com/OfficialLeeMinho), according to his agency Starhaus Entertainment.

"We set up an official fan network to prevent social networking piracy for people overseas and it is getting a great response", said an official at Starhaus, referring to the recent fake Twitter incident that Lee had warned his fans about.

The fake account had reportedly accumulated over 60,000 followers who thought it had been opened up by the actor.

The actor currently has over 540,000 members on his Facebook page, a popular social networking site that connects and enables interaction among Internet users around the world.

Many celebrities nowadays use the site to communicate with their fans; Hollywood actor Leonardo DiCaprio currently has about 296,831 members for his page while the figure for Korean pop group Wonder Girls stands at 241,294.

Lee's Facebook page features various information about the actor including the films, commercials and various charity campaigns he has taken part in for UNICEF and Good Downloader.

Users' log-in statistics revealed that most of Lee's Facebook loyals are composed of fans from overseas, particularly Asia.

While Korean fans only accounted for 3 percent of the membership, a whopping 72 percent of users were known to be from Taiwan, Malaysia, Singapore, Indonesia and the Philippines as well as Canada and France. The remaining 25 percent of members were from the United States.

Although the members' communication on Lee's page are mostly conducted in English, many fans provide translations of comments written in other languages in order to exchange comments about their favorite star.

Lee, 22, rose to mega-stardom after starring in the smash hit "Boys over Flowers" last year and currently stars in the MBC TV series "Personal Taste" alongside Korean actress Son Ye-jin.

"Lee Min-ho's Facebook attracts half-million fans worldwide "
by HanCinema is licensed under a Creative Commons Attribution-Share Alike 3.0 Unported License.
Based on a work from this source