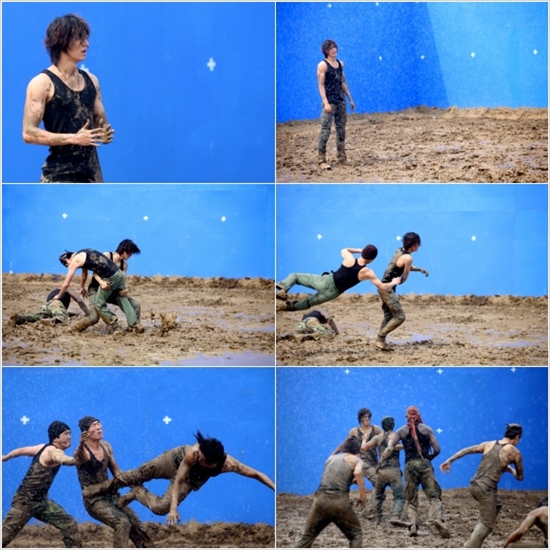 Lee Min-ho is Lee Yoon-seong, an MIT doctorate on the National Communications Team in the SBS drama "City Hunter" coming this 25th of May.

He is spreading out his fighting spirit to express Lee Yoon-seong who has the best skills in all areas.

There was a martial arts sparring shoot in Keyonggi-do Paju on the 4th last month. He had to roll in the mud in a weather as cold as 1~2 degrees.

He showed perfect action with no NG's in the rain without using a stand-in as well. He kicked well in the mud that was difficult to even stand in and showed perfect face acting although his face was hard to read as it was covered in mud.

A person in the production said, "He has been training for martial arts to be able to express the Lee Yoon-seong character to his fullest. He was trained by Philippines Kali Arnis who is famous as being the Won Bin martial arts coach in the movie "The Man From Nowhere"".

Lee Min-ho this day worked well with several martial arts masters and made the staff overwhelmed.

Meanwhile, other than Lee Min-ho, Park Min-young, Lee Joon-hyuk and Kara's Goo Ha-ra are also in the drama "City Hunter".

"Lee Min-ho shows Won Bin's "The Man From Nowhere" moves in "City Hunter""
by HanCinema is licensed under a Creative Commons Attribution-Share Alike 3.0 Unported License.
Based on a work from this source