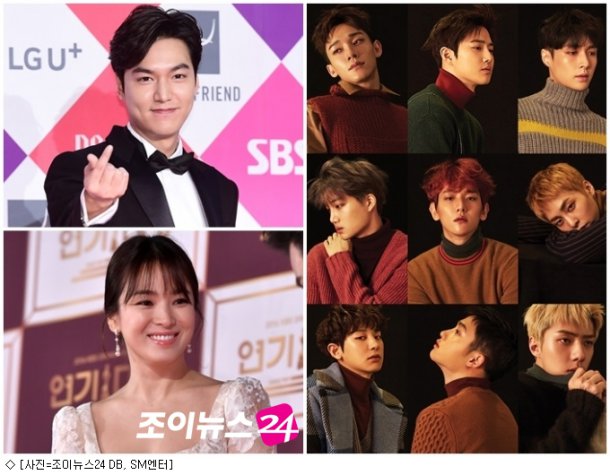 Lee Min-ho, Song Hye-kyo and EXO are the stars that gained the most Hallyu fans last year.

The list for the 12th Soompi Awards was released. This event decides its winners according to votes of Hallyu fans all over the world.

The most competing part of the Soompi Awards was 'Artist of the Year'. Girl group Twice was tough competition. The result was EXO for their continuous hit songs "Lotto", "Lucky One" Monster" and "For Life".

Bangtan Boys came in second. Their songs were defeated by EXO but they were shoulder to shoulder in fan votes. The album 'Wings' and its songs "Blood, Sweat and Tears" was nominated for "This Year's Album" and "This Year's Song".

Twice came in third with "Cheer Up" and "TT". They didn't make it to "Artist of the Year" but they were honored by being called the Best Girl Group. Got7 was nominated for Best Choreography, Best Music Video and Best Fandom.

Lee Min-ho was nominated for Best Actor in K Dramas. Song Joong-ki and Park Bo-gum were nominees but Lee Min-ho won as he is more globally famous.

Lee Min-ho has become the face of KBS as he's starred in "Boys over Flowers", "City Hunter", "The Heirs" and more. It wasn't easy for him to out-win Park Bo-gum but his global fandom helped him excel.

Second Lee Jong-suk from "W" and Ji Chang-wook from "The K2". They have managed to stay in the Top 10 ranking of K drama actors.

Song Hye-kyo was announced the Actress of the Year. Second came Yoona who starred in "The K2".

Meanwhile, the Soompi Awards presents awards to those stars who stood out in the whole of last year. Fans from all over the world participate in voting for about 2 to 3 weeks at the end and beginning of the years. This year, about one hundred million fans participated.