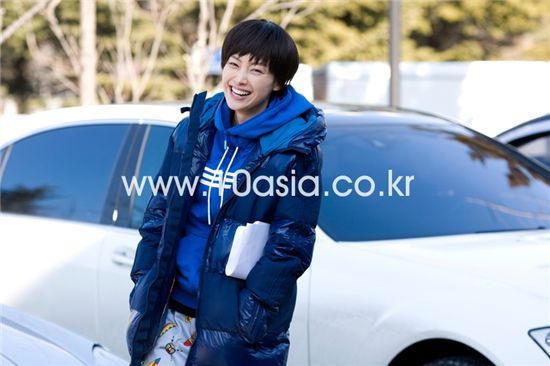 "Ahhh- haaandsome-" Director Kim Yeong-gi, who had been keeping a chic silence all along, blurts out in near-exclamation. The "Beautiful" actress Lee Na-young was described as "handsome" in her portrayal of Lee Na-bong during her cameo appearance in MBC sitcom "High Kick Through The Roof". But this fatally attractive handsome character also managed to melt the heart of 'ice prince' Lee Ji-hoon (played by Choi Daniel). It was truly incredible to watch Choi Daniel, who had always portrayed the image of a chic city guy, return to his actual age and behave as charming as a younger brother.

"At first, I was really scared to join this staff who has been working together, wearing a mustache". It was not an easy challenge for Lee Na-young, even if she had already played a woman pretending to be a man in her film "Lady Daddy". "I had been a fan of 'High Kick Through The Roof'", said the actress who is similar to the show itself in that they both dislike cheesy set-ups. She asks, "Director, do my eyes look like they're too focused?" As soon as the director orders, "Yeah, I think it would better if you looked more drunk", Lee Na-young clasps her two hands together, as if in prayer and focuses on her emotions. When Lee acts out a drinking scene in the next shot, Lee screams out, "Yikes, this is real soju!" as soon as the director yells 'Cut!'

The revenge of Lee Na-young, or Lee Na-bong, continues with slapping the back of Ji-hoon's head. When Lee asks, "I have really mean hands, is it okay to hit your head like this?" Choi Daniel answers "It's all right, it's not like you're slapping my face", but there is the look of pain in his eyes. As the scene gets shot several times, Choi Daniel utters in pain. "Is there a revenge scene for this? A revenge scene? When she makes another cameo appearance, please write up a scene where I hit her!" Everyone, including Choi Daniel, would like to see this man, or woman, again but that would be hard. Lee Na-bong disappeared after making a single, powerful cameo appearance.

"Lee Na-young turns man on the set of "High Kick Through The Roof""
by HanCinema is licensed under a Creative Commons Attribution-Share Alike 3.0 Unported License.
Based on a work from this source