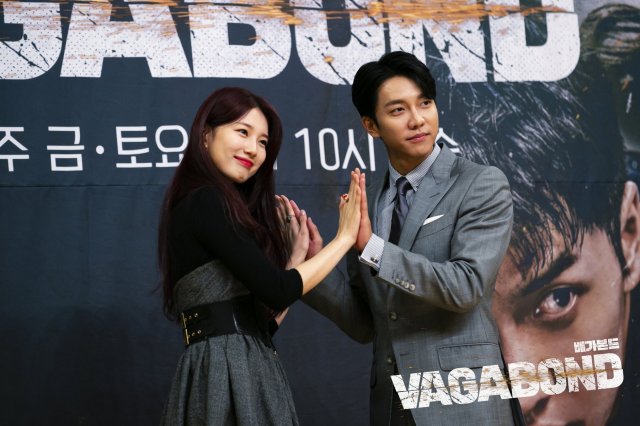 Bae Suzy (left) and Lee Seung-gi pose at a press junket for their new TV series in Seoul on Monday.

Lee Seung-gi and Bae Suzy have reunited for the first time in six years for the new TV series "Vagabond", which goes on air on Friday.

The two previously co-starred in "Gu Family Book" in 2013.

The stars attended a press event for the new drama on Monday.

"I have such good memories from the time I worked with Lee six years ago. So I felt really good when I heard we would be working together again. It was even easier and more fun to work with him this time", Bae Suzy said.

Lee said, "I didn't think another chance would come along to work with an actress of Bae Suzy's caliber, so I'm happy to have a second opportunity to do so. Making "Vagabond" was physically demanding, but Bae Suzy was so cool about it. It definitely helped the filming process go smoothly", Lee said.

"Vagabond" is an action melodrama about a man who is involved in the crash of a private passenger plane. The crash leads him to delve deep into a government corruption scandal, at great risk to himself.

"Lee Seung-gi, Bae Suzy Reunite for New TV Series"
by HanCinema is licensed under a Creative Commons Attribution-Share Alike 3.0 Unported License.
Based on a work from this source