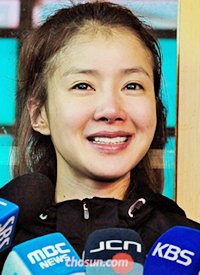 Actress and boxer Lee Si-young will not participate in the 2014 Incheon Asian Games in September as she failed to enter the final tryouts on Tuesday. She also missed the previous two tryouts.

"She didn't have enough time to build up her skills for the bout", said Kim Won-chan, manager of Incheon City boxing team. "But we will keep working on her conditioning with the aim of getting her into the World Championships on Jeju Island in November".

She is expected to focus on acting for a while as she has been cast as the female lead in the new KBS drama "Golden Cross", which will start airing early April.