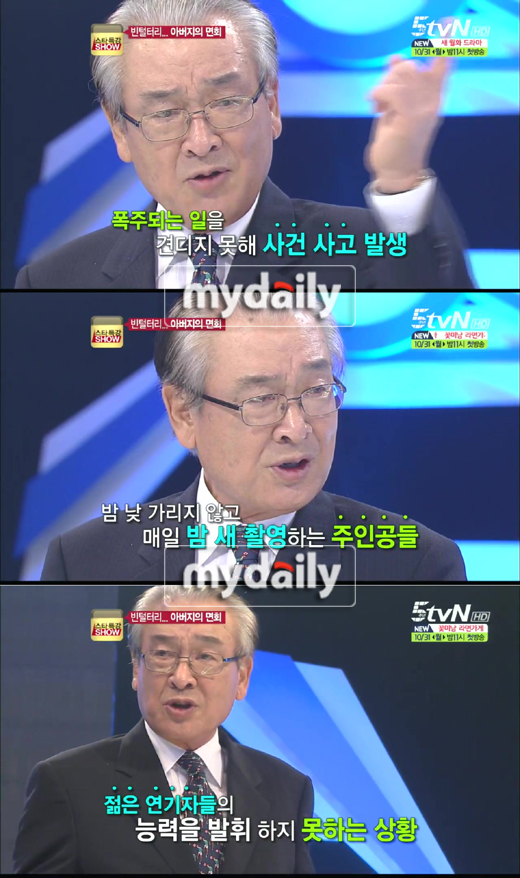 On the cable channel tvN "Star Lecture" on October 16th, Lee Soon-jae brought up the producing environment from the past and said, "It wasn't easy acting then. We did TV dramas live".

He continued, "Usually if it's live, we practice it more than ten times a day. Even though we have it memorized perfectly, once the camera goes on, we forget everything and make mistakes. All those actors and actresses were chased out. So we all used to start from practicing our scripts. If that was how it was today, all the actors and actresses wouldn't have been able to survive. Impatient producers swear at you, rip the scripts and that's what you had to endure. All the middle aged actors and actresses have all at least cried once before".

He continued, "Making two episodes in a week happened recently. Usually, it was script given today and tomorrow started shooting. It even takes days to just make and polish a tiny item but how is it that a script is handed out one day and the drama starts shooting the next? How can something be made so easily?"

He then said, "Overflow in work lead to incidents. Our lead characters spend several nights without sleep. Because of exhaustion, young actors and actresses can't fully display their talents".

"Lee Soon-jae examines the drama producing environment, "Increase in work load leads to incidents""
by HanCinema is licensed under a Creative Commons Attribution-Share Alike 3.0 Unported License.
Based on a work from this source